Not all, but more than one would think.

Unless caught casting a spell, a wizard fox can maintain a perfectly mundane appearance.

They even manage to evade magical detection, wizard vision being-as it always seems to be-an exception. But even then, the signs are subtle.

The best way to identify a wizard fox is to ask. If they wish, they may respond with coy words, a mix of short barks and childish laughter.

Initially, they bicker. They don’t like the way you dress, the way you walk, or the way your breath smells. They say this all with a gleeful smile. 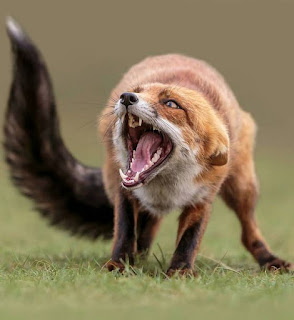 Look at that adorable grin

The wizard-fox loves conversation, and after a few minutes of brusque critiques they happily indulge in their endless curiosity. Where do you come from? What type of robes does the party cleric prefer? Why, do you think, do mice run away? Where do they run?

After a little while, if indulged with answers to their many questions, the wizard-fox will likely begin to fixate on a single party member, a wizard if present and the member with the best cloak otherwise. If there is a wizard, but another member has a better cloak, the wizard-fox will be visibly confused and repeatedly ask if wizard doesn't have some other, nicer cloak elsewhere.
The wizard-fox will propose a sort of trade, starting by offering an enchanted bauble from their den for an item of equal-or likely greater-value from the party. Foxes themselves aren't enchanters, but they tend to have close ties with forest craftspeople, especially moss dwarves (of Dolemnwood) and Forge Badgers. Wizard-foxes are especially fond of fine textiles with which to line their den, and they will leap at the opportunity to acquire any fabrics of magical origin.

If trade goes well and there is a spellcaster in the party, the wizard-fox will likely challenge them to a game of chess, the loser having to teach the other one of their known spells.

Wizard-fox spells are in most cases almost identical to known wizard spells, but always with a vulpine twist. A wizard-fox’s magic missile consists of more foxes, tiny, blue, and joyfully springing out to nip and bite their target. The flames of a wizard fox fireball roll with the faces of a hundred cackling foxes. All wizard-foxes are particularly proud of their version of disguise self, which they have adapted to all the minute variations of fox facial features. They will be disappointed when your dim human eyes can’t recognize the difference when cast. Most foxes look quite similar. Regardless, the spell can prove useful in a non-fox's arsenal, where it actually works as a low level polymorph into a fox form.

While most of the wizard-fox repertoire consists of familiar spells, the foxes have a few spells they call their own.

Make Smug
R: 50’ T: object D: [sum] minutes
Causes the owner of target object to feel great pride in their ownership of the targeted object. Anyone who praises the object gains a +2 to reaction rolls with the owner.

Make Smug is a staple of wizard fox dealings. At lower levels, it is used to make new owners of one of the fox’s baubles pleased with their purchase and friendly towards the fox. At higher levels, it can be used to discover any magical effects of eye catching objects or to escape a deal going south, as the fox can simply grab a pin from someone’s cloak and throw it in the brush, escaping as the owner frantically searches for it. When alone, many wizard-foxes will cast this spell on their own favorite object, simply to revel in the joys of owning it.

Prepare for Winter
R: touch T: creature or object D: variable
The target, if textile, permanently increases in value by [dice] times plus [sum] gold as its weave becomes thicker and its colors more vibrant. This only works once per piece. If the target is a furred creature, they become resistant to cold and cold damage for [dice]*[sum] hours, fur (or hair) becoming thicker and gray. Otherwise, the object simply becomes pleasingly warm to the touch.

The wizard foxes use for this spell is twofold. First, they cast it upon themselves in the winter months to better face the bitter cold. Beyond this, they bolster the value of their fabric collections.

For the King the Rook
R: touch T: self and object D: [sum] minutes.
The caster links themselves to the object of their size or less, and may swap places at will once during the duration of the spell so long as a physical path exists that the caster could take to reach the object. At 3 [dice] the caster may swap even if there is no physical path.

The wizard foxes merged their love of chess and magic this spell. A favorite wizard fox move is to target their opponents king during a game of chess, and swap when they win a game, for dramatic effect.


Every Beast a Knight
R: shout T: creature D: [dice] rounds.
Target creature will aid the caster should combat arise, seeking to flank and attack adversaries. At 4 [dice] a woodland creature of 1HD or less will permanently serve the caster as an imitation of courtly knight (with a max of 2 creatures so bound)

Outside of combat, creatures charged with magic knighthood will obsess over perfecting the nuances of chivalry and finding appropriate arms and armor (perhaps acorn shields and thistle swords) for their service. Wizard Foxes find this endlessly entertaining.


The Aims of the Wizard Foxes
Should trade and initial interactions go well, a wizard fox may reveal more of their goals in the current forest. They are inevitably dungeon delvers themselves, and they are frequently willing to share information about their subterranean explorations.

(Many wizard foxes also frequent the Stygian Library of Emmy Earl, if such a place exists in your setting)

A Wizard Fox's core goal is usually to advance one of the two driving principles of their kind.

The foxes desire to destroy or politically dominate the courts of the 9 cat kings, the governing pantheon of all felines. At the very least, the foxes want a binding deal with the court that will no longer eat mice or small rodents. The chances of this every occurring are next to none, so most likely it is war. Because the foxes have no gods of their own, this is an uphill battle. They hate cats.

(This is somewhat ironic, as legend has it that that it was a cat, a wizard's familiar, that first taught a fox magic.)

In light of their slim odds, the wizard foxes’ other pursuit is to somehow gain entry into the plane of rodents, where mice disappear to when they are out of sight. There they would feast like kings. They love mice.

For these reasons, all wizard foxes pursue power. They have settled largely on three methods.

The Means of the Wizard Foxes
They trade with human wizards, arguably the most inventive casters, to build their libraries and develop new spells. But their spellcasting capacities can’t rival human stores. Wizard foxes’ casting abilities are capped at a somewhat meager (2 MD) limit. To bolster their powers, wizard foxes need to find or enchant the finest sorcerous robes possible. (Sorcerous robes can upgrade or grant additional MD if made with sufficient quality)

To this end they study the sorcerous weavings of the spiders, training as students. Should an adventurer find their way into the den of a wizard fox, they will find lavish textile collections with all manner of fine spider or fox made enchantments.

Without gods of their own, the wizard foxes adapted. With prisms and other shining things, the foxes have learned to steal the blessings of the salmon gods.


The Departure of the Foxes

Foxes are disappearing at a somewhat alarming rate. This comes in large part due to the wizard foxes’ development of a grand spell: Where the Mouse Goes.

As The Mouse goes is arguably the most significant spell of the Wizard Foxes' collections. Though incomplete, the spell is thought to give entry to the mice's realm with enough throttle. When cast powerfully enough, the caster disappears and becomes a figment stuck in the collective memory of an area. As cunning as they are, few wizard foxes can resist the temptation to try the spell once they are strong enough. Using wizard fox rituals they may cast on mundane foxes to study whether the spell works, but inevitably they will try it on themselves. Whether they reach their destination or not, the frequency of use of this spell makes a future without foxes a sad possibility.
________________________________________________________

Small note: This is my first post! If you enjoyed, a comment here or mention on reddit or the OSR Discord would mean the world! I’m hoping to post relatively content dense posts like this every other Monday as I start out, and we will see how things go from there! Let me know if the generators work well for you, or if you'd prefer just having tables.